Some of our centre’s projects are complemented by a series of themed or interactive maps, which allow users to interact more directly and closely with the information. For this purpose, two geographical platforms have been used: Terrasit and Google Maps.

In connection with the ‘Las obras públicas en las comarcas valencianas: el Camp de Morvedre’ project, which involved a publication and an exhibition, this map displays 17 of the most important and significant elements of public works in this Valencian region and their respective networks.

In connection with the ‘Las obras públicas en las comarcas valencianas: el Baix Vinalopó’ project, which involved a publication, an exhibition and an information leaflet, this map displays 17 of the most important and significant elements of public works in this region of Alicante and their respective networks.

This map was developed in parallel with the publication Territorio y red viaria. Evolución histórica de las carreteras valencianas (1900–2013), a project that won the 9th Demetrio Ribes Prize for Research in 2012. One of its most innovative aspects was the inclusion of three maps of historical Valencian roads throughout the twentieth century, which display the network as it was in 1909, 1956 and 1976, as well as the location of the road workers’ houses.

The map can be found on the Generalitat Valenciana’s map viewer (Institut Cartogràfic Valencià). The route to find it is: ‘capas’ menu > Infraestructuras > Road infrastructures > Historical roads. Click on the link or on the image to see it: http://visor.gva.es/visor. 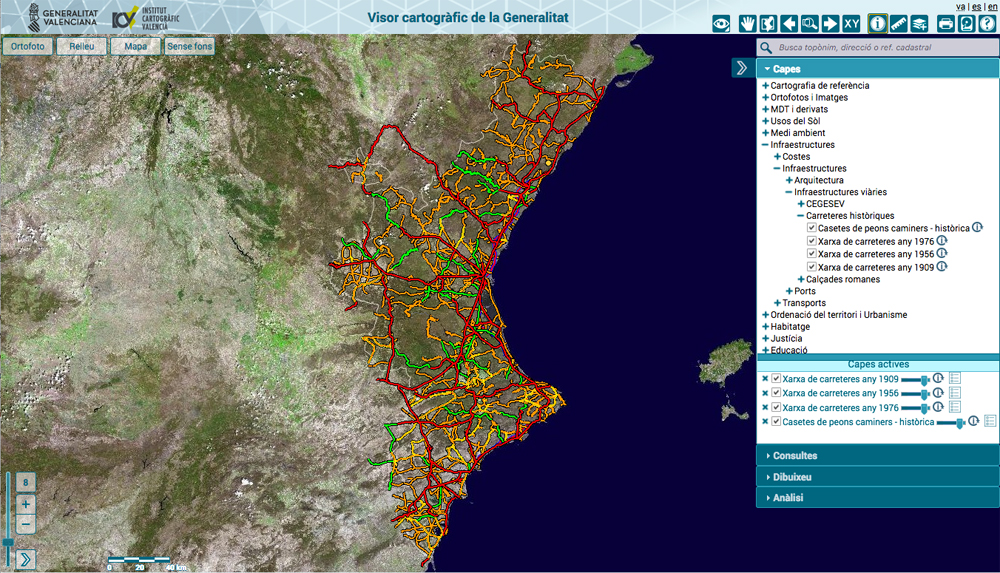